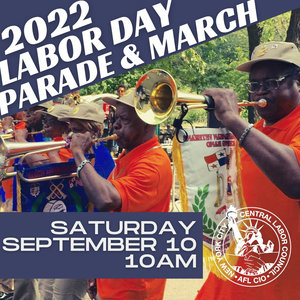 Saturday, September 10th, 10AM: The New York City Labor Day Parade and March is returning to Fifth Avenue for the first time since 2019! Tens of thousands of workers representing more than 200 unions and constituency groups will come together in solidarity on the 140th Anniversary of the first Labor Day parade in the United States, when more than 10,000 workers marched from New York City Hall to Union Square in 1882. (Check out our promo video here!)

The Parade will kick off at 10am at Fifth Avenue and 44th Street, marching uptown to the NYC CLC Reviewing Stand at 64th Street.

The theme of this year’s parade is Workers Leading, Workers Rising, reflecting the enormous surge in labor activism and organizing that is taking place across the nation and across all sectors of the workforce, leading to historic worker victories and an increase in worker power. Please join us for a fantastic day of solidarity and fun!