32BJ Members on Strike at 108 Leonard in Manhattan 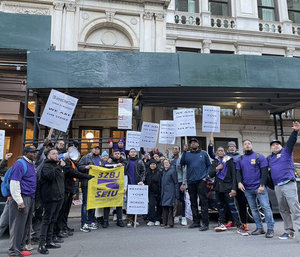 On Tuesday, members of 32BJ SEIU went on strike at the super luxury residential building 108 Leonard Street, a 166-unit condo in the Tribeca section of Manhattan also known as the Clock Tower building. The strike was called by fifteen building workers who act as porters, concierges and maintenance workers to protest a number of unfair labor practices alleged against the condominium developed by Elad Group.

The building owners voluntarily recognized the workers’ union in the spring of 2021, when they sought representation from 32BJ, but negotiations have since come to a grinding halt. Workers at the building earn $21.50 an hour, and are pushing to be brought in line with roughly 30,000 workers across New York City represented by 32BJ, where the salary minimum is $28 an hour. Workers are also seeking better health care coverage among other benefits. Read more in Gothamist, and watch video of Tuesday's rally with supporters including building residents below!