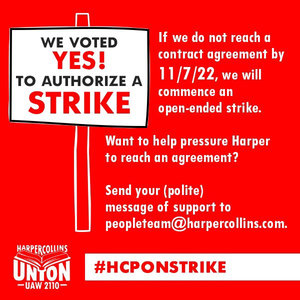 Unionized employees of HarperCollins Publishers have authorized another strike by 95.1% vote. The strike will commence on November 7 if the publisher does not agree to a fair contract.

The union, Local 2110 of the UAW, represents 250+ employees in editorial, sales, publicity, design, legal, and marketing departments. The union is bargaining for higher pay, a greater commitment to diversifying staff, and stronger union protection. Negotiations started in December 2021 and unionized employees have been working without a contract since April 2022. This strike authorization and a strike deadline come after months of negotiations and a one-day strike on July 20. Most recently, the union has filed an Unfair Labor Practice charge with the National Labor Relations Board in response to the company’s refusal to provide information pertinent to bargaining.

“We have been bargaining for 11 months toward an agreement that would make HarperCollins a more accessible, equitable, and just workplace,” said Laura Harshberger, a Senior Production Editor in Children’s Books and the Union Chairperson. “Once again, the members voted to authorize a strike because the company refuses to agree to a fair contract for the employees that make it so successful. This time, our mandate is even stronger, with even greater participation across union membership.” Read more here, and help the union out by sending a polite message of support to peopleteam@harpercollins.com.