Netflix Music Supervisors File for Unionization Election at Labor Board 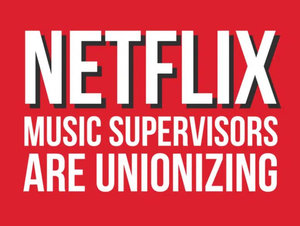 On Monday, Netflix’s Music Supervisors, in collaboration with the International Alliance of Theatrical Stage Employees (IATSE), filed with the National Labor Relations Board (NLRB) seeking a union certification election. The move comes after an overwhelming majority of music supervisors currently or recently employed by Netflix requested voluntary recognition of their union from the company, a request Netflix has declined.

Music Supervisors are the craftspeople who specialize in storytelling through music. Their responsibilities include curating the music used in a project, guiding the creation of original songs, working closely with composers, and securing licensing for the use of a project’s music. Their creative vision is behind some of the most beloved moments in film and television. But, as the importance of music in media has grown, their responsibilities have expanded, their conditions have deteriorated, and their pay has stagnated. The terms of their employment do not reflect their increased workload or the cultural impact of their work. Read more here and in The Hollywood Reporter.

Netflix Music Supervisors File for Unionization Election at Labor Board