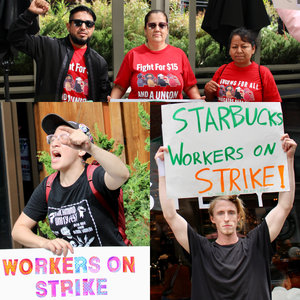 On Tuesday, workers at the flagship Starbucks NYC Roastery on 9th Avenue in Manhattan walked off the job, beginning a strike in response to health and safety issues including mold and bedbugs. In the days since they've been joined on their picket line by hundreds of supporters including the NYC CLC and union members and electeds from all around the City. The workers at the Roastery voted to unionize with Starbucks Workers United in April.

Workers are demading that Starbucks replace the moldy ice machine and address the bed bug issue through inspection and fumigation. The mold has been making workers sick and also puts the health of customers at risk, and the bed bugs are an obvious issue to everyone who enters the Roastery.

The press has also been out on the picket line—check out just some of the coverage from VICE, ABC 7, 1010 WINS, AMNY/MSN, Patch, the NY Post and NY1.

Workers will be back out on the picket lines for Day 4 of their strike TODAY starting at 9am. Stop by and show your solidarity at 61 9th Avenue, New York NY 10011.

Take the No Contract, No Coffee Pledge!