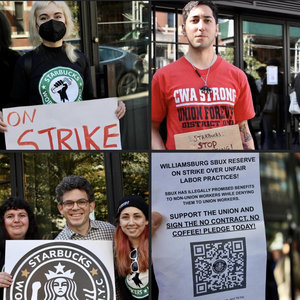 Starbucks workers at the Williamsburg Starbucks Reserve went on a one day strike Saturday over unfair labor practices and Starbucks' refusal to come to the table and negotiate in good faith. Watch a CBS News report on the strike action here. Starbucks Workers United is asking supporters to stand with them by taking the #NoContractNoCoffee pledge. By taking the pledge, supporters commit to participating in the actions called for by Starbucks Workers United, taking the lead from workers, and responding to workers’ calls for action to further their campaign. Take the pledge here!