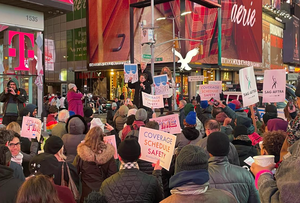 Broadway's Actors and Stage Managers took to the streets last night to rally for a fair contract from their employers. Actors' Equity Association has been at the bargaining table with The Broadway League since September. At stake is the union's biggest contract, which governs shows on Broadway as well as Broadway League-produced sit-down shows in other parts of the country. Equity members are looking for changes to rules related to coverage (i.e. understudies, swings and additional stage managers) scheduling and safe workplaces.

COVID laid bare structural issues within the industry, but it didn’t create those issues. Coverage, schedule and safety have been pressure points for many years – it took a pandemic for those beyond the theatre walls to notice. Broadway prior to the pandemic was doing record-breaking business, with the 2018-2019 season entertaining 14.7 million audience members and grossing $1.8 billion. While the business hasn’t entirely recovered from the shutdown, The Broadway League reports that the 2022 season played to 82% capacity with a higher average ticket price (of $125.63) than the seasons prior to the pandemic. They can afford to do right by the actors and stage managers who make the shows happen!

Members and supporters including the NYC CLC rallied in Times Square on Thursday evening – check out more photos and video of the event on the union's Twitter feed!