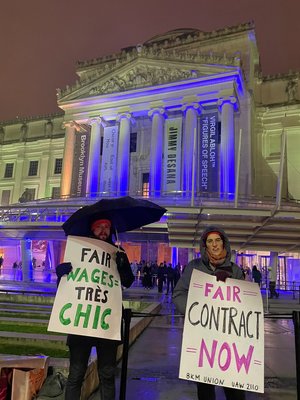 Unionized workers at Brooklyn Museum, members of UAW Local 2110, rallied in the wind and rain outside the museum's main entrance on Eastern Parkway on Tuesday to call attention to stalled contract negotiations. Staff members gathered outside a VIP opening gala celebrating the institution’s forthcoming Thierry Mugler exhibition to inform the gala’s high-profile guests that the museum’s current proposal remains unfair and undervalues their labor after nearly a year of negotiations. As it stands right now, the museum’s proposal includes a one-time pay adjustment for about 40 to 50 union employees — less than half of the union members represented by UAW Local 2110.

“We wanted to make sure we were visible at a show like this," said 2110 member Owen O'Brien. "A few people have happily taken leaflets, saying that they’re supportive. And multiple people have taken and worn our union buttons into the exhibition in support. We love working at the museum and we love what it stands for, we just want to make sure that it’s living up to its mission that we all believe in.” Read more in Hyperallergic and ARTnews, and follow the Brooklyn Museum Union on Twitter.