Immigrant Workers Say Chipotle is Firing Them for Organizing 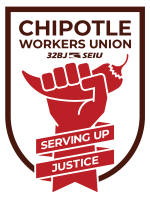 Across the country, overworked and underpaid Chipotle workers, organizing with 32BJ SEIU, have been fighting to form a union. Since 2019, in New York, immigrant workers, who have been leading that fight, have faced workplace retaliation, with several even being fired for their organizing efforts.

Last April, Winifer Ruiz began organizing her co-workers at Chipotle's White Plains Road location in the Bronx with the help of 32BJ SEIU to form a union at her location. When she signed a petition demanding an increase in wages, her managers found out and pressured her not to support the union.

“I feel I was being targeted for my involvement, ” Ruiz said. “She said I was crazy for signing the petition and that unions are bad and that they steal people’s money through dues.” On September 19th, she was fired.

Under the Fair Work Week Law, fast food restaurants can’t fire or reduce the hours of a worker by more than 15 percent without cause. Since the law went into effect in 2017, DCWP has received more than 500 complaints about Fair Workweek violations, opened more than 250 investigations, and obtained resolutions requiring over $24 million in combined fines and restitution for more than 17,000 workers. Still, Winifer Ruiz had her hours severely reduced and was abruptly fired, in clear violation of the law.

“No one who bravely decides, as Winifer did, to stand up and demand the respect and dignity all working New Yorkers deserve should ever wonder if doing so will cost them their jobs,” said Kyle Bragg, SEIU 32BJ President. “Sadly, her experience is only one example of Chipotle’s troubled operations in New York.” Read more in Documented NY!