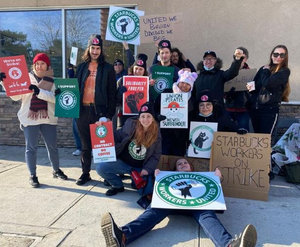 Starbucks Workers who are members of Starbucks Workers United/Workers United NY NJ at the NYC Roastery in Chelsea are in their third week on strike after they walked out over health and safety issues at the location. Workers cited mold in the ice used to make drinks and in the freezers, and bedbugs in the break room. Starbucks denied the allegations but a report this week in THE CITY confirmed that the Department of Agriculture did an inspection and found mold and numerous other violations, issuing a failing inspection report. Workers have said they would return to work if Starbucks submits proof, such as a full exterminator report, that the mold and bedbug issues have been remedied.

Yesterday, Starbucks Workers at 100+ stores across the country including seven stores here in NYC also participated in #RedCupRebellion, a one day Unfair Labor Practice strike in response to the company’s failure to bargain in good faith. Workers have been waiting almost 12 months for progress in bargaining, and most stores have waited 6 months or more. There are over 250 unionized Starbucks locations, and yet Starbucks has only met with a small handful, and are now walking out of negotiations after mere minutes.