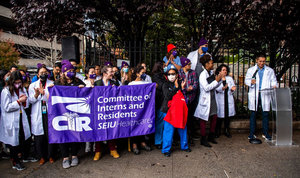 Resident physicians at Montefiore Medical Center, one of the largest teaching hospitals in New York City, announced their intention to form a union with the Committee of Interns and Residents (CIR/SEIU) on Tuesday. After an organizing campaign that started more than a year ago, a supermajority of the 1200+ person unit has requested immediate voluntary recognition.

This historic effort is the most recent in an ongoing wave of housestaff unionization across the U.S, with more than 2,000 residents choosing to join CIR within the last six months. The physicians’ historic effort can trace its roots to the 1970s, when Montefiore residents and fellows first organized with CIR. Now, more than 40 years after the removal of their union, these frontline healthcare providers are once again demanding change. Montefiore has until the end of the day today to respond to the residents' request for recognition. Read more here and in Gothamist!