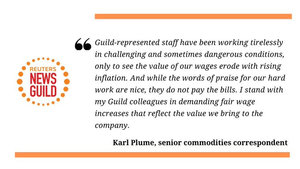 NewsGuild of New York members at Thomson Reuters have announced that a supermajority of union members voted in favor of authorizing their bargaining committee to call a strike if their employer continues bargaining in bad faith. Eighty percent of the bargaining unit participated in the vote and 81% voted in favor of the strike authorization.

In August, the NewsGuild filed an Unfair Labor Practice (ULP) against Reuters for bad-faith bargaining after the company repeatedly stalled out bargaining by failing to provide the union with bargaining dates. Additionally, the bargaining unit has gone two years without a wage increase during a period of high inflation, while Reuters has routinely reported high profits. The Thompson family, which owns Thomson Reuters, is the richest family in Canada and their personal net worth increased by more than $8 billion over the past two years.

The strike authorization vote empowers the union’s bargaining committee to call a strike if the employer continues to stall out bargaining in violation of labor law and if progress isn’t made in contract talks, which are set to resume on November 14. The bargaining committee will demand again at the upcoming bargaining session that the company schedule more dates to reach an agreement.

“Our colleagues have given us a clear mandate to do what it takes to get a contract that reflects runaway inflation and the company’s multibillion-dollar cash hoard. So far, the company has dismissed the incredible amount of dedication we showed during the global pandemic and what we continue to do on a daily basis,” said Tim McLaughlin, Unit Chair, Reuters Guild. The NewsGuild of New York represents around 300 US-based Reuters journalists, photographers, videographers, copy editors, producers and technicians. Read more here and in Bloomberg.