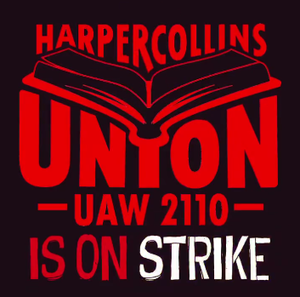 Union members at HarperCollins, one of the largest publishers in the country, started an indefinite strike yesterday, with workers and supporters gathered outside the company's New York City offices to make their demands. The action comes after a drawn out negotiation process, with workers asking for higher wages, stronger commitments to diversifying staff and better family leave. The approximately 250 unionized workers are represented by UAW 2110, and include staff in design, marketing, publicity and sales. These employees have been working without a contract since April.

"What we're asking for is a fair wage," said Stephanie Guerdan, associate editor at HarperCollins Children's Books and shop steward at the HarperCollins Union.

In the months leading up to the strike, the messaging from the workers has centered on meager pay while the company reported record profits in 2021. According to a recent statement, the average salary for HarperCollins employees is $55,000. The minimum salary is $45,000.

The striking workers are asking authors, agents and freelancers to withhold any new business with the company – but to continue to work on any existing agreements or contracts. Read more at WNYC, The Guardian and Common Dreams, pledge a contribution to the union's strike fund here, and follow their fight on Twitter here!