Workers at HarperCollins Publishers on Strike 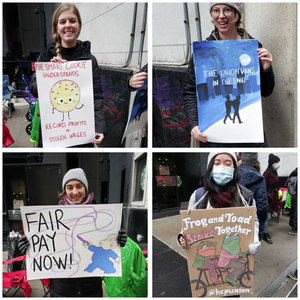 Union members at HarperCollins, one of the largest publishers in the country, are beginning the second week of their strike, which began last Thursday after a drawn out negotiation process, with workers asking for higher wages, stronger commitments to diversifying staff and better family leave. The approximately 250 unionized workers are represented by UAW 2110, and include staff in design, marketing, publicity and sales. These employees have been working without a contract since April.

The mainly women workers average $55,000 annually, with a starting salary of $45,000. Many employees cite pressure to work extra hours without additional compensation. The company, one of the top five book publishers globally, reported record-setting profits in the past two years.

This week, as the 73rd National Book Awards kicked off at the swanky Cipriani Wall Street in New York City, union members took their strike to the sidewalks surrounding the venue. As guests lined up to grace the NBA's red carpet, they were greeted by members who offered information on worker rights, fair wages, and buttons to show support for their cause.

Read more about why "Passion Doesn't Pay the Bills" in Vulture and Entrepreneur, pledge a contribution to the union's strike fund here, and follow their fight on Twitter here!