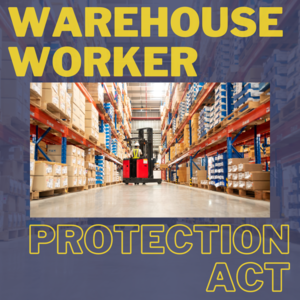 Unsafe work speeds, unreasonable work quotas, dangerous work, and insufficient breaks all contribute to the skyrocketing rate of injuries and sickness in the warehousing industry, which is why the Retail, Wholesale and Department Store Union (RWDSU) pushed for the introduction of the Warehouse Worker Protection Act this year. This week, the critically needed WWPA was signed into law by Governor Kathy Hochul. The WWPA will help protect workers from inhumane quotas, and prevent workers from being disciplined if they fail to achieve these quotas due to the worker meeting basic human needs like bathroom and water breaks.

“Warehouse facilities are popping up across New York at staggering numbers; Amazon alone has opened more than 70 facilities in the state and over half of those facilities have been built since January 2021," said RWDSU President Stuart Appelbaum. "At the same time, we have seen increased stress, pain, and resulting safety issues for warehouse workers, due to increased quotas and speeds. Due to extreme, unknown and unreasonable work quotas warehouse workers have suffered heart attacks, strokes, repetitive motion injuries, and irreparable life-long joint and back pain. At Amazon, the injury rate is 54% higher than the average rate for the state’s warehousing industry – and even that is a staggering misrepresentation of the reality given how many injuries at Amazon go unreported."

“Today, we’ve achieved a big win for workers’ safety. Thank you to the bill sponsors New York State Senator Jessica Ramos and Assemblymember Latoya Joyner for their leadership on this commonsense health and safety bill, the NYS legislature for passing this critical safety measure, and Governor Kathy Hochul for signing it into law. The WWPA can start helping workers who need it now more than ever." Read the RWDSU's full statement here.