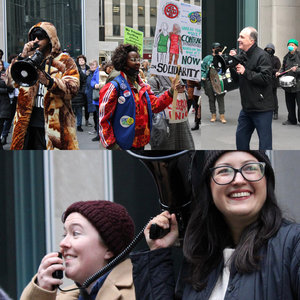 HarperCollins Union members and a large crowd of supporters including the NYC CLC, elected officials, and leaders and members from unions across the City gathered Wednesday for a rally marking the 50th day of their strike in front of their employer’s parent company, News Corp. HarperCollins management has refused to go back to the table or respond to the union about bargaining since before the strike began on November 10. These members have been working without a contract since April 2022.

HarperCollins employees have had a union for more than 80 years, making them one of the earliest unions of “white collar” workers in the country. The company, one of the top five book publishers globally, reported record-setting profits in the past two years. HarperCollins is also owned by Rupert Murdoch’s News Corp, which in 2021 saw an increase of approximately $1 billion in revenue. Members are demanding that HarperCollins comes back to the negotiating table and agrees to a contract that reflects their need for diversity commitments, union protections, and wage adjustments.

Help the HarperCollins workers continue their fight for a more equitable workplace by contributing to their hardship fund!