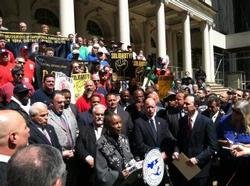 “The Executive Order was done without public discussion and behind closed doors. No effort was made to communicate with the workers, they deserve better than that, and that’s why we back their legal challenge,” said NYC Central Labor Council President Vincent Alvarez.

NYS AFL-CIO President Mario Cilento said City Hall’s unilateral move has ramifications beyond the city workers directly impacted. “This is a slap in the face to all workers and all New Yorkers. The New York State AFL-CIO will fight with our brothers and sisters to overturn the Mayor’s unilateral decision. The Labor Movement in this state will never tolerate such blatant disregard for the voice of working men and women on an issue that directly affects their lives, their livelihoods and their well-being,” Cilento said.
The Bloomberg Administration’s Executive Order affects public sector workers including thousands who are members of unions affiliated with the Building and Construction Trades Council of Greater New York.

“It is just wrong to reverse course on a policy that has worked for the people of this city for more than a century with virtually no discussion or notice, particularly when this action questionably involves one city official unilaterally taking power from another. We have demonstrated a willingness to work with this administration, but that requires dialogue. On this matter, there was none. That is no way to do business and it is no way to govern," said Gary LaBarbera, president of the Building and Construction Trades of Greater New York.

“The recent attempt by Mayor Bloomberg to seize control of prevailing rate regulation from the Comptroller is nothing more than a naked power grab aimed at suppressing the wages and benefits of hard-working men and women employed as City trade workers, and is part of the larger nationwide assault on working people by the richest one percent. This is unacceptable, and the union will do everything in its power to make sure that the members we represent retain the right to earn fair and equitable wages,” said DC 37 Executive Director Lillian Roberts.

Mike Bilello, Executive Secretary-Treasurer of the NYC District Council of Carpenters, said the Mayor’s decision was an attack on all working people in the city. "As we're just starting to recover from an economic crisis, now is not the time to create a system that cuts the wages and benefits of working families. Even more egregious is the Mayor has said he will not honor the contracts he previously signed, leaving more than 10,000 workers out in the cold."

Joseph Colangelo, President of SEIU Local 246, said “with the stroke of a pen, Mayor Bloomberg has flushed down the toilet the process to determine the wages and benefits for prevailing wage employees. This is an attack on Labor the likes of which the City has never seen.”