Fostering Dialogue Between Labor and the City 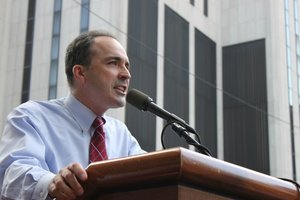 The November 5th General Elections are right around the corner, and New Yorkers are excited about the possibilities brought about by the promise of a new administration. Labor’s overwhelming support is behind Bill de Blasio, because he has consistently proven his commitment to fighting for New York’s working men and women. From rallying to save Long Island College Hospital and Interfaith Medical Center, to standing with low-wage workers fighting for better wages, benefits and respect, Bill de Blasio has been on the front lines, supporting workers and the Labor Movement. Bill de Blasio understands the benefits of creating union jobs, and the historical contributions of organized labor. We look forward to having a real seat at the table with the new administration and City Council, to craft and support pro-labor, pro-worker legislation and budgets – the real way to create sustainable change.

We understand that the new administration will have to work with groups from all sectors, and we understand the need for such cooperation. New York is one of the world’s most diverse cities, and investing in residents is what helps our city to flourish. Organized labor is dedicated to ensuring that workers are able to secure the opportunity to grow, thrive, and raise families here in New York City.

In the coming months, organized labor will look to the new administration to open up the lines of communication between all sectors looking to improve conditions for New Yorkers. The reality of the last twelve years is that the Labor Movement has largely been shut out from having a say in the way our city is governed. Municipal employees have been working without contracts for years, and now there is talk that the city cannot afford to pay these hard-working men and women the wages and benefits they have earned. These workers are not looking to get rich, but they do want to make enough to comfortably feed their families, invest in their local communities, and retire when they are ready. Working people are now more determined than ever to fight for what they have earned.

The city’s Labor Movement is also looking to work with the new administration to help promote responsible development projects that pay workers fair wages. If we are going to use public funding to provide tax credits and subsidies, we should make sure the city benefits. Our city must stand with working people to promote good jobs, fair wages, and safe working conditions. In doing this, the new administration would be working to create the broad-based prosperity needed to help our city grow.

Another priority for the new administration must be to create the good jobs needed to make vital repairs to our city’s crumbling infrastructure. It is no secret that this has been a tumultuous year for our roads, bridges and public transportation system. From days of closures and months of repairs caused by Superstorm Sandy, to the general fixes needed as a result of everyday wear and tear, there is much work to be done. And this is work that can be done using skilled, professional union labor. We will look to the new administration to help make sure that local New York dollars are used to create jobs, and invest right here at home.

New York’s working men and women are ready for a change. Workers are ready to be paid the wages and benefits they deserve, and they are ready to get back to work in good, union jobs. We are encouraged by the prospect of a de Blasio administration that will be open to working with the Labor Movement. We look forward to collaborating with a more worker-friendly Mayor, and a City Council comprised of elected officials who are committed to growing our economy by investing in working people. We all have a stake in the success of our local economy, and the New York City Labor Movement is committed to helping to create a better, more prosperous New York City.

NYC CLC Gets Behind de Blasio For Mayor

“Whether he’s been in Brooklyn fighting unnecessary hospital closures, or standing with union members fighting for fair contracts and better wages,