NYC CLC Gets Behind de Blasio For Mayor 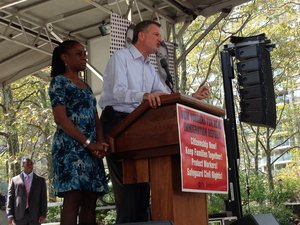 “Whether he’s been in Brooklyn fighting unnecessary hospital closures, or standing with union members fighting for fair contracts and better wages, Bill de Blasio has solidified his position as a true advocate for working people," said CLC President Vincent Alvarez.

“We’re going to have a new mayor, a new public advocate, a new comptroller, a new speaker of the City Council, many new City Council members. You know what? I think the working people of this city, they need some hope right now because they’re under extreme pressure and have been for a long time,” Mr. Alvarez told Politicker in a recent interview.

Below is the list of endorsements made by the New York City Council Central Labor Council, AFL-CIO leading up to the General Election on November 5