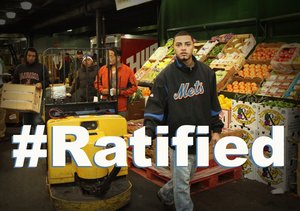 Bronx, NY – Workers at Hunts Point Market voted to approve a new, three year contract today, with 97% of workers voting "yes."  The 1,300 workers, members of Teamsters Local 202, will receive significant wage increases in each year of the contract.

Hunts Point Market is the largest produce market in the world, serving most of the restaurants and grocers in the New York area.

Following the ratification vote, Teamsters members and leaders said the ball is now in the City's court.

"This is only the first step in ensuring that Hunts Point Market remains a home for good jobs in the long term," said Kane. "Now it's time for our City government to step up and ensure that this public property has the necessary infrastructure to meet 21st century needs and withstand the next hurricane."

The facilities have long needed renovation and the urgency has only increased following Hurricane Sandy. The market is located on an East River peninsula.

Several mayoral administrations have considered projects to renovate Hunts Point Market, but no plan has yet moved forward. Some fear time is running out.

Save the Date: 2021 Climate Jobs and Just Transition Summit