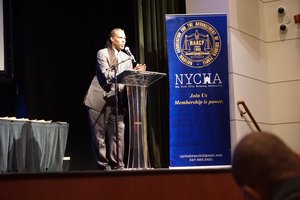 “Marvin Holland is a rank and file member and union political director of TWU Local 100, who has spent over 25 years fighting for the needs of working men and women, and we are proud to endorse him to represent the 9th Council District,” said Vincent Alvarez, President of the NYC Central Labor Council, AFL-CIO. “As a union member, Marvin has a unique understanding of the issues affecting working people in New York City. We know his commitment to improving conditions for workers, and we are confident that Marvin’s experience and vision will help create sound policies and good, middle class jobs in Harlem.”

Marvin began his career in the NYC labor movement with TWU Local 100 working as a NYC Transit Stations Department Cleaner.  In 2001, Marvin became a Shop Steward, and in 2004 he became a Delegate to the NYC Central Labor Council. In his capacity as political director, Marvin regularly works with the NYC council and NYS legislature to advance legislation and policies which protect working people on the job, raise wages for workers, and ensure that community needs are supported by government.

As an active member of his community, Marvin sits on the boards of local organizations such as the African-American Day Parade Advisory Board, Mid-Manhattan Branch of the NAACP, Community Voices Heard, PA’LANTE Harlem, and the NYC Labor/Religion Coalition.

The NYC Central Labor Council, AFL-CIO represents 1.3 million workers, and 300 affiliated unions in the building trades, and public and private sectors of the New York City economy. The NYC CLC is the largest regional labor federation under the direction of the national AFL-CIO.