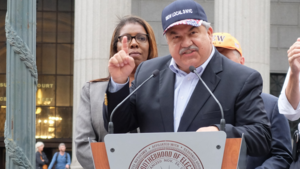 The New York City Labor Movement is shocked and profoundly saddened to learn of the sudden passing of AFL-CIO President Richard Trumka. As leader of our nation’s Labor Movement, he championed the belief that all work has dignity, along with the rights of all working people to bargain collectively, to fair wages and workplace safety, and to a voice at work.

President Trumka was a larger than life figure, a tireless fighter on behalf of working people across our nation, and a true and loyal friend to the NYC Labor Movement. Over the years we have been proud to stand with him countless times to fight for a fair and level playing field at work, and to create an economy that works for all working people. President Trumka always answered the call to support NYC’s working families, and our Movement is stronger because of his leadership.

We send our deepest condolences to President Trumka’s family, friends, and his many colleagues at the National AFL-CIO and across our nation’s Labor Movement, and recommit ourselves to the fight to which he dedicated his life.

The New York City Central Labor Council, AFL-CIO is the nation's largest regional labor federation under the direction of the AFL-CIO, and represents 300 unions and 1.3 million working men and women in the New York City region.

The labor movement, the AFL-CIO and the nation lost a legend today.