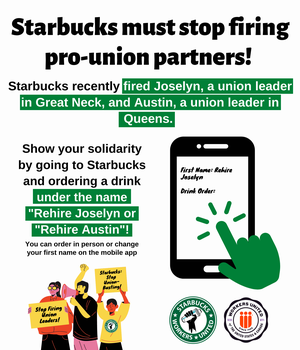 This week, Starbucks fired Joselyn, a union leader in Great Neck, Long Island. Since workers at Great Neck filed for union representation in February, management has targeted Joselyn for her leadership in the union. Joselyn had worked for the company for seven years and had not even had a write up until April, when their union election was held.

This is the first firing of a Starbucks Workers United leader on Long Island and the second in downstate NY. With this firing and the firing of Austin Locke in Queens earlier this month, it is clear that the company is becoming even more aggressive in their union busting in NY. They have also become more aggressive in the media and have been spreading lies about these firings.

Workers United NY NJ is asking allies to support these two workers by ordering their drink at Starbucks under the name "Rehire Joselyn" or "Rehire Austin." The easiest way to do this is to change your first name on the mobile app, but you can also do it in person at the counter. And after you order your drink, take a pic and tag @SBWorkersUnited and @WorkersUnitedNY so they can amplify!