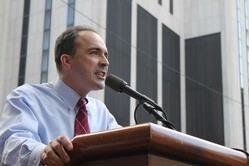 By DAVID SEIFMAN and DAREH GREGORIAN

A state judge yesterday smacked down an executive order by Mayor Bloomberg that could have saved the city millions of dollars a year in wages paid to city workers.

The City Hall edict had yanked control over salaries for 10,000 unionized city employees — including carpenters, electricians and other trades — away from city Comptroller John Liu’s office.

Those employees make up 3 percent of the city work force whose wages aren’t set by collective bargaining with the city. They have been controlled instead by what the comptroller determines to be the “prevailing wage” for those jobs in the private sector.Vincent Alvarez, president of the New York City Central Labor Council, called the ruling “a great win.”