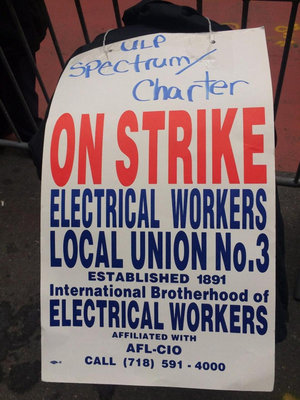 This week, Mayor Bill de Blasio lent his voice to the cause of 1,800 workers who have been out on strike since March 28. These members of IBEW Local 3 work as service technicians, engineers, and warehouse workers for Charter/Spectrum. The workers have been operating without a contract since 2013. On “Inside City Hall,” which notably runs on Charter/Spectrum-owned NY1, Mayor de Blasio said, “This is a situation that has to be resolved for the good of New York City...we’re talking about working people who are trying to make ends meet, trying to get a fair contract.”

IBEW Local 3 workers remain out on strike after Charter/Spectrum refused to bargain in good faith, attempting to slash benefits by halting contributions to workers’ pension and medical plans. The workers are also protesting the unfair discipline of workers for repeat service calls from customers, when the root cause lies in the company’s outdated, faulty equipment and unrealistic promises to customers. As pointed out by Mayor de Blasio, Charter CEO Thomas Rutledge makes $98 million a year after bonuses: “I have to imagine the resources are there to give working people a decent contract, and I hope this is something that can be resolved for everyone’s benefit.”

Want to support the workers? Here’s a list of picket locations, running from 8AM-5PM daily.