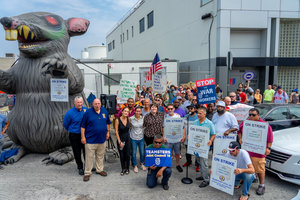 The workers who supplied New York with heating oil, diesel, and gasoline throughout the pandemic are paid as much as 50% less than workers doing the same job at other companies, and receive inferior health and retirement benefits. They organized to join Teamsters Local 553 in 2019 and went on strike this April after the company’s owner, billionaire John Catsimatidis, refused to agree to a fair union contract despite two years of negotiations.

“A year ago, essential workers were called heroes. Now that they want a raise, they are called replaceable,” Demos Demopoulos, Secretary-Treasurer of Teamsters Local 553, said. “John Catsimatidis is mistreating the workers who got us through the pandemic. These workers have the support of their elected representatives, the local community, and 120,000 Teamsters across New York City. We are united and we are going to win this strike.” Read more here!