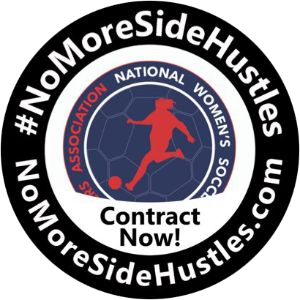 Soccer is one of the most successful professional women’s sports in the United States. But many players are working two, three or even four full-time jobs to be able to play soccer professionally. The players are organizing and saying: No more side hustles. Add your name to support their fight!

Roughly one-third of all National Women’s Soccer League Players Association (NWSLPA) members make the league’s minimum salary of $22,000 per year. About 75% make $31,000 or less. (For comparison, the minimum salary for players in Major League Soccer [MLS], the men’s professional soccer league, is $84,000. Even a reserve player in MLS makes a minimum of $65,600.)

The National Women’s Soccer League (NWSL) is in its ninth season, with 10 teams and two expansion teams scheduled for 2022. NWSLPA will not wait another decade to achieve fair contracts, equal pay and professional playing conditions. Support NWSLPA members and their fight for #NoMoreSideHustles. Sign the pledge now!