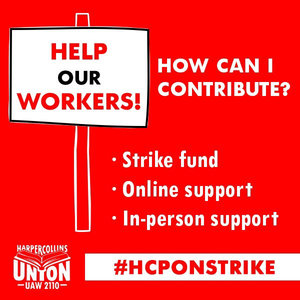 Staff at Harper Collins Publishers including workers in editorial, sales, publicity, design, legal and marketing held a one day strike on Wednesday to back up their demand for a fair contract. The union has been at the bargaining table since December 2021, but the company will not agree to a fair offer. Workers are members of UAW 2110, and have been organized for 80 years.

Harper Collins has reported record breaking profits over the past two years but staffers average only $55k a year with starting salaries as low as $45k. Harper Collins claims to be committed to diversity, equity, and inclusion but has rejected union proposals to codify this. The company is also refusing to agree to basic union security rights.

“I love my job, I love my authors, it’s an incredible privilege to get to work on these books, and I would love to do it for the rest of my life, if I can afford to,” said Stephanie Guerdan, an associate editor in the children’s department who joined the strike. But with a salary of $56,000 a year, she said, she worries she won’t be able to stay. “There’s a running joke in publishing that you have to have a rich partner to be able to make it in the industry,” she said. “That should be a thing of the past.” Read more in the NY Times and follow the Harper Collins Union on Twitter for more info on how to support them!