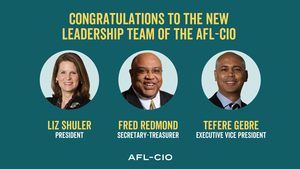 The AFL-CIO Executive Council last Friday elected Liz Shuler to serve as president of the federation of 56 unions and 12.5 million members. Shuler is the first woman to hold the office in the history of the labor federation. The Executive Council also elected United Steelworkers (USW) International Vice President Fred Redmond to succeed Shuler as secretary-treasurer, the first African American to hold the number two office. Tefere Gebre will continue as executive vice president, rounding out the most diverse team of officers ever to lead the AFL-CIO.

The election of Shuler and Redmond comes after the unexpected and untimely passing of Richard Trumka, who served as AFL-CIO president from 2009 until his death on Aug. 5, capping a more than 50-year career of dedication to America’s unions and working people.

“I am humbled, honored and ready to guide this federation forward,” Shuler said after her election. “I believe in my bones the labor movement is the single greatest organized force for progress. This is a moment for us to lead societal transformations—to leverage our power to bring women and people of color from the margins to the center—at work, in our unions and in our economy, and to be the center of gravity for incubating new ideas that will unleash unprecedented union growth.”

"Liz has long been a tenacious and visionary leader and advocate for workers all across our nation, as well as a true friend of the NYC Labor Movement, and we look forward to our continued partnership as we fight for an economy that works for working families everywhere," said NYC CLC President Vincent Alvarez. Read more here.

Congratulations to Liz Shuler, who has just made history by taking her place as the AFL-CIO’s first female President.

As a graduate of the University of Oregon with a degree in journalism, Elizabeth (Liz) Shuler, like many young people today, pieced together part-t